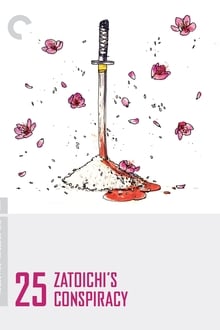 Zatoichi, the famed blind swordsman, returns to his home village for the first time in many years. He is befriended by Omiyo, who had the same wet-nurse as Zatoichi. He also encounters a boyhood friend, Shinbei, who now is wealthy and appears not to remember Zatoichi. Shinbei seems to be interested in repaying the villagers’ debts, but is in reality manipulating the ownership of a now-valuable rock quarry. Zatoichi learns of the subterfuge and confronts his old friend, who has a score of yakuza swordsmen backing his play.